"Three years later, we have used the blocks as toy phones, people, cars, food, cymbals, teethers, building blocks, and rubble in working trucks. ... The mower has been integrated with blankets to become the foundation of a conveyor belt. It has also been tipped up to be a slide in a pretend playground. It is a versatile toy – used over the years for a variety of play and lessons. It is durable toy – used in ways the manufacturers probably couldn’t have imagined…or could they?"

I just love how young people make sense of the world. It is both egocentric and fanciful. Like in Leo Lionni's book "Fish is Fish" where the fish imagines birds to be fish with wings and cows to be fish with utters, a preschooler has a small world within which to understand how stuff works. One of the most pressing, if not the most pressing, mysteries to figure out for a preschooler is himself or herself...especially their bodies.

In the "Gears Gears Gears" post, I told a story about a sleepless night. I hadn't slept because my "wheels were spinning" - a phenomenon many adults experience when they turn an idea over and over in their head. It usually happens when you want to be sleeping and it almost never results in any productive conclusions. Mikey was two and a half when he overheard me use this lingo and was intrigued. 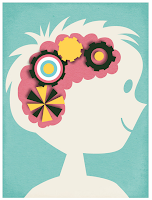 It made sense to my preschool engineer that there might be wheels or gears in his head. The idea was even supported by his work on the iPad when he played Toca Doctor. In a simple matching puzzle, the child drags and drops four gears to their spots in the patient's head. The "Lite" versions are free. (Not available on Android.)


Of course, like everything, we explain our bodies in terms our children might understand or relate to. Our bones are like blocks (birds' bones are like pipes). We have hoses and funnels inside there, too. What I've really enjoyed is that as he grows older Mikey starts trying to fit his experiences into the framework of his life. For example, he always asks me why we have to sleep. I have to repress my inner voice that screams, "because I need a break!" and answer him thoughtfully. Recently, he has bought the explanation that when he sleeps his body builds his bones and new gears in his head. He accepted it so thoroughly that the other day he woke up from his nap and told me, "Mama, I heard a 'clunk' while I was sleeping. You know what that sound was Mama? It was a new gear in my head! I heard it get built."

Children are perceptive. It is their blessing and, sometimes, their curse. At the worst of times, my kids are overwhelmed by all the amazing (and not-so-amazing) things that surround them. They cry, run scared, or freeze in a tantrum. But as they grow up they are learning how to tune out the not-so-amazing things and give their attention to things in order of importance. I feel joyful when Mikey or Anna pulls me aside and exclaims, "Look at what I see!" They slow me down, they remind me to be present in the moment, and they almost always show me something really cool.

During our week-long stay at Crystal Mountain Resort in Michigan we ventured to Frankfort to play at the beach. Frankfort is a little lake town with all the typical trimmings - a marina filled with motor boats and schooners, a main street with shopping and restaurants, and a brewery. Stormcloud Brewing Company looked like a good place for our family to grab an early dinner. It served beer, pizza and popcorn and had a patio. The lot next to the patio was empty and grass-covered and Mikey and Anna made many friends with whom they could run and play while adults enjoyed our drinks. Little did we know that there was a preschool engineering discovery to be made!

I sat at a table outside with Anna while the boys went inside to place our order. Minutes later Mikey exploded onto the patio with all the excitement of having made a discovery. Anna and I toddled inside and followed Mikey's pointing finger to the ceiling. There they were - the most unbelievably cool ceiling fans I had ever seen. The hardware that held the propellers was vintage-cool. The blades were sleek and simple. But the truly remarkable thing about these fans was the motor and the belts. There was a single motor that drove three fans. A belt stretched between the motor and the first fan's base; a second belt stretched between the first fan's base and the second fan's base; then there was another belt and another fan. As the motor turned, the belts moved and all the fans turned. It was a preschool engineer's dream come true!

As my family stood there with our necks craned, other patrons stopped and looked up. People remarked to me that Mikey is so observant and said, "he'll be an engineer." I smiled. I don't really care if Mikey becomes an engineer, an artist, or a race car driver. I just hope that he maintains his curiosity and nurtures his aptitude for being present and perceptive.

If you have the opportunity to design a space in your house for your preschool engineer and you want these fans, here is the site: Fanimation.