Safety in the Kitchen

With all the mechanical interests in the house, safety is always on my mind. The kitchen is where I find myself most likely to be a helicopter-mom what with the stand mixer, immersion blender, and food processers - all of which have awesome rotating parts. But helping in the kitchen is one of Mikey's favorite things to do and all the dumping and measuring provides him with some wonderful foundational lessons in mass and numeracy. 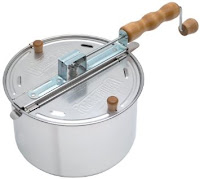 Not surprisingly, making chocolate chip cookies is one of Mikey's all-time favorite jobs in the kitchen. He does measuring and pouring and turns the mixer on and off. He watches the cookies bake in the oven and after nine minutes he can hardly wait 'til one is cool enough to eat. Almost all the excitement revolves around watching the paddle rotate and spin on the KitchenAid, though.

The pretend play of making cookies has evolved over the last year. First, he joined some big kids at the park who were "baking" in the sand. Poor Mikey got a couple mouthfuls of sand before understanding that they were pretending. (It breaks my heart to think he was so innocent to believe in the magic that those big kids were actually turning sand into cookies!) Then Mikey directed the cooking at the park. ("Mama! You almost forgot the vanilla!")

A Kitchen Toy
Most recently, Mikey was baking by himself in our rice box. (We live in the Phoenix, AZ area and we NEED indoor sand-like stuff to pour and dig in even in the heat of summer.) He sat there using a whirly pop as his stand mixer and the rice as his ingredients. I was pleased when he invited me over and explained that he had turned it off so I could stick my hand in. Then he told me to take my finger out - he was closing the lid so that I didn't stick my finger in there while the mixer was spinning so fast! He didn't want to chop off my finger. (His concern, not mine.)


An iPad/iPhone App
Toca Boca. He can chop, saute, food process, microwave and boil any number of foods before feeding it to his guest. If you're ready to regulate some screen time then I say to start with Toca Boca!