Mikey got a Remote Control Crane for his birthday. He could hardly contain his excitement. I rolled my eyes to myself and wondered where this giant and cumbersome toy monstrosity was going to go. 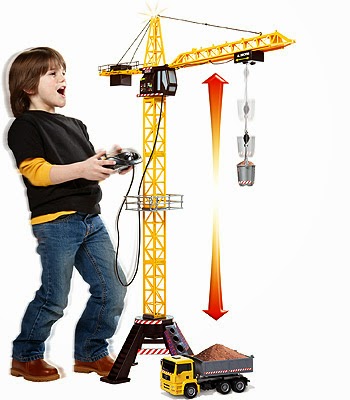 But I guess the size of the toy is part of the appeal. It is tall and the boom is long but, if my child is careful, it is lightweight enough to be carried all over the house. Two motors control three dimensions of movement. The boom can swing around a full 360 degrees and the hook moves up and down and along the length of the boom. The base seems to be a perfect design - wide enough and strong enough for supporting the toy but not so wide that children bump into it when playing. Essentially, it is just like a real crane! It even has a place for counterweights.

Aside from the eye-rolling "OMG" of a parent, there are a couple things to know about the resilience of this toy. For $40 I would have hoped it were a little stronger. Instead of sending a nearly useless toy dump truck to accompany the crane, the manufacturers should have engineered the hooks/"chains" that secure the boom in place. In the picture, above, the black lines that extend from the top of the mast out to the end of the boom are plastic "chains" and are not strong. I have had to replace them with fishing line because the hooks broke off the ends. But my fishing line is VERY strong and we don't worry about the boom or the counterweight boom falling over.

Everyone who comes to visit loves this toy. Mikey's friends, my adult friends, Anna and her friends, the baby sitter....everyone remarks on how cool it is. Given all those reactions and the fact that it is used by my four year old boy and my 2 year old girl on a nearly daily basis (for six months) I guess it is a pretty good toy. ;)

p.s. You should also know that rechargable batteries do not work in this toy. (I do not understand why.)