It was pre-dawn over Lake Huron. The water in the bay was calm and still, like glass if left alone, lapping lazy ripples if gently disturbed. A rarity for the Great Lakes, even in a bay. My eyes had only recently woken up, invited to observe the wee morning hours by the faintest summer breeze. My body was reluctantly paddling my kayak to the point where Lake Huron met Saginaw Bay. It longed for a cozy bed but my heart yearned to see the sun come up over the water, chasing the stars away.
The night before I had agreed to join my sister’s beau to paddle out and watch sunrise because I am a sucker for any opportunity to revel in nature. Slowly but surely we quietly made our way out into the big water. The whole reason we were there was to be in and appreciate nature. But looking back on that day I remember the paradox that emerged during our conversation - this young man who clearly loved nature was unable to think much about it.
He was about to graduate from college with a degree in business. He was smart, articulate, and adventurous in many regards. But his enterprising spirit was retreated when I asked him what he thought about the stars. He would not even venture a guess about the nature of the sun we were watching glow. I was by no means an expert in astronomy but I was inclined toward science - I had earned degrees in electrical engineering and I was about to marry a physicist -  but my vocation was teaching and learning. And so I found myself then as I often do now, inquiring about and nurturing learners.
“I’m not good at science,” he had said. I replied, “I’m not testing you. I’m just asking what you think.” But my gentle invitation talk about science was rebuffed. The sun was rising, warming everything it touched. The waves were getting bigger, gently rocking our boats and guiding us through the water. I decided to drop the science of it and just sit back and enjoy being out there.
I am acutely aware of STEM-phobia that plagues teaching and learning in the classroom. I have earned degrees in electrical engineering where I was often the only woman in the classroom. I have worked in a research lab and as a computer programmer, working by myself for hours at a time in order to contribute to team success. I have taught math and engineering at universities and colleges, where my students often said, “I’m not good at math.” And I have earned a graduate degree in education where I studied history, trends, challenges, and philosophy of science curriculum and instruction.
There is one thing I know to be true about science and science education: Scientists are excited to share what they know and what they discover. But sharing what they know is like any other social situation, the challenge lies in communication.
To open yourself to the world of science, first consider the following scenario. You are at a party, sitting with your best friend and giggling about an inside joke when another friend comes over and sits down near you and asks, “What’s so funny?”  You and your BFF exclaim, “it is an inside joke.” Jokes are funny and it always feels good to share a laugh with a friend. So you attempt to describe the context of the joke, who was there, and what happened. All the while, you hope that your other friend “gets it.”
When a scientist learns something new, he or she is often faced with a similar challenge of explaining the discovery in a way that is analogous to you explaining your inside joke. It is easier to explain the discovery to other scientists who were there or otherwise understand the context of how discoveries are made. Bringing a layperson into the conversation requires more effort and the less the layperson knows about science the more effort it takes. That is why scientists, teachers and educational researchers dedicate a LOT of energy to inviting young people into the community. There are well-defined descriptions of what to teach, how to teach, and when the learning has been achieved. But all those efforts are focused on formal K-12 schooling.
Most likely, reader, you are not constrained by the formalities of school. You are a parent or caregiver, long since graduated from high school and/or college. And as such you have the luxury of learning science outside the classroom! What is more, you can learn science alongside your young child who is also free to learn.
The best part of learning science with your child is that it is self-directed (or child-directed). You determine what you study, how you study it, and when you are satisfied with what you have learned.
So I am inviting you to re-approach something that may have seemed unapproachable yesterday. I want you to find your sunrise, enjoy everything it takes to merely observe it, and then...study it. I believe that if you are open to learning science then your child will learn, too. 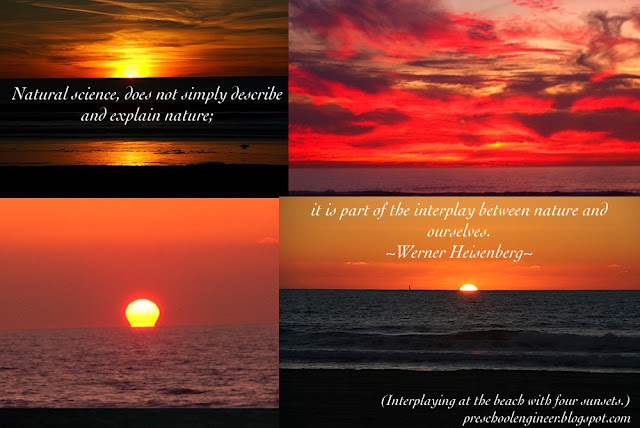 Email ThisBlogThis!Share to TwitterShare to FacebookShare to Pinterest
Labels: parenting, smartest baby on the block