That's Not the Way 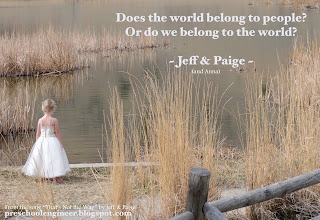 "That's Not the Way" was produced as part of the Mighty Wolf album by Jeff and Paige and has spurred some important conversations in our household. In short, it is Jeff and Paige's take on the same story Dr. Seuss told in the story "The Lorax." A king in search of making the world a better place for his people begins to invent ways to "beat biology" and eventually sees how his processes begin to wreak havoc on the natural environment. But the most compelling question is about ownership and humankind's role of coexisting on earth with other creatures: