How I Overdosed on Cuteness 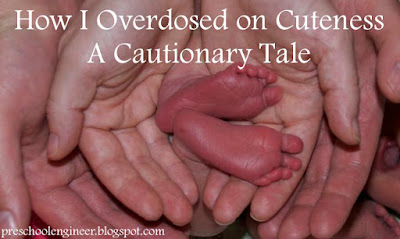 Teeny Tiny
He arrived three weeks before we expected him. Six pounds one ounce of cuteness made me feel the biggest feelings I had ever felt. I held him and my heart almost burst with an overwhelming sense of responsibility. This tiny human was mine to raise and to protect. And, like anything else I do, I threw myself into the work.

My M.O. for Love
In the beginning, I understood my role perfectly. I had to do everything for him: feed him, carry him where he needed to go, change his diaper for him. It felt good because doing things is my specialty. I enjoy doing things, seeing the product of my work, and checking tasks off my list of things to do.

It felt so good to do everything for my son that I started sacrificing my needs. After all, I had been warned that having a child changes everything. Prioritizing my son over myself seemed like the right thing to do. I started skipping my yoga practice, showering every other day instead of every day, and, eventually, quitting my part-time job.

My new full-time work would be as mom. I would show him the world!

The Little Professor
How beautiful it all began. He could spend an entire morning crawling up and riding down slides at the playground. He could spend hours throwing rocks in a stream. And when he was only one year old his eyes lit up when I showed him how sand pours. Having left my teaching job, where I taught physics, engineering, and math, I was tickled to see him study playground physics. It was as if he were a miniature version of his father who was a professor. Unfortunately, physics was just about all he was interested in.

He had no interest in imitating the work of life. Never once did he imitate me cooking or join me cleaning. He never attempted to get himself dressed. He preferred to study objects and how they moved. He could spend an afternoon just laying on the floor and watching how the pages of a dictionary fell as his thumb slowly released them in a flutter. He contented himself by watching how the wheels of his truck turned against the floor. And instead of pretending to shave with his father, he sat with a shave brush intent on the motion of the bristles.

The Perfect Storm: Nature (Autism) & Nurture (Attachment)
I wouldn't know until he turned four years old that his attention to objects over humans was symptomatic of his being autistic. Another symptom was his lack of language. For two years I rationalized that it was OK that he didn't speak because he could jump and run like a child twice his age. Plus, we didn't seem to have trouble communicating. I could intuit his needs and he could confirm with sign language.

Between his disinterest in self-care and my inclination to do things for for him, we were digging ourselves deeper into unhealthy codependent relationship. Intuiting his needs made me feel important. Our rhythms were in sync and it felt good to be attached to each other. The only problem was that a second child was on the way. How could I intuit his needs if my attention was needed elsewhere? How could I do it all for two young children?

Burnout
He was almost two and half years old when his sister was born. He still wasn't speaking and his constant repetitive motion was beginning to impede on daily life. I could not get him the exercise he needed. It had been cute when he was three months old and would lay on his back and run his feet. I had lamented fondly that he was "all boy" when he jumped like a madman in his Johnny Jump Up or bounded down the trampoline at gymnastics with the big kids. Spinning in circles is just a childhood pastime right? But what about the arm-flapping (one of his nicknames was our "little flapper") and head-banging?

He needed more than I could give, or, from my other perspective, I couldn't do enough for him. Feeling like I was failing, and with a six month old baby in tow, we began weekly speech therapy and occupational therapy, complete with at-home therapy recommendations. I was doing so much, too much.

Rock Bottom
One year into therapy I knew I needed more help. I sought out preschools. Two schools wouldn't enroll him and steered me toward developmental psychologists. A few weeks before getting a diagnosis that included autism, the third "developmental" school expelled him.

Then I wiped my tears and made a plan.

I had to learn when to help and when to watch.

I learned that I could help him if he needed it. But by not doing everything for him, I had more to give when he truly needed it.

Just in Time for First Grade
That six pound baby is now almost 70 pounds and beginning his first full-day school experience. He is a first grader at our local elementary school. He still needs to jump and run and spin...a lot. He still is intensely observant of and keenly intuitive about how things work. He is still reluctant to do the work of life.  And he can analyze a social situation but he doesn't flow easily in and out of playground play. But he can do school. And when he gets home, we can cooperate as separate, whole, loving individuals.

Find Your Guide
I was not uninformed about being a parent. I had read all sorts of books and articles about the early years. I liked how books on attachment parenting paid close attention to meeting a child's needs. I liked the bullet points in the "What to Expect" books (however alarmist they seemed). I liked how simple the sleep-training books seemed. But what I needed was something that blended my interest in honoring my son's right to being an individual with my right and responsibility to act as an adult. I didn't discover Janet Lansbury until about the same time my daughter was born and my son was almost 2.5 years old. If I had to do it all over again I would have started with her sensible, palatable and balanced guidance.