Building bridges is the quintessential experience for aspiring engineers. In fact, when I taught an "Introduction to Engineering" class at a northwest university, building a bridge with toothpicks and glue was the project around which our reading and writing revolved. And if you search the internet you will see that the activity is popular in every age group from middle school to post-secondary school.

For Mikey, building things for the sake of building them was never interesting. He liked to demolish things that I built. But two things have recently inspired him - Curious George and an iPad game.

Curious George gets to do a lot of cool science and engineering. In his adventure titled, "A Bridge Too Farm

," George builds a bridge made out of toothpicks, marshmallows, and playing cards. After some trial and error, making observations and revisions, George creates a bridge to save stranded chicks from an island.


After watching Curious George, Mikey was ready to build. I took out some toothpicks and small marshmallows and together we built a bridge. He worked on making dumbbell-looking pieces that I then attached to the ends of triangles. 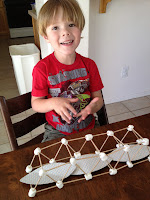 The fun of using marshmallows is that you get to have a little treat while you work. I couldn't help but to remember my days playing with wooden tinker toys as a child. For those little preschool engineers who can't indulge in a marshmallow, or 25 marshmallows, here is a link to some classic wooden tinker toy-like things called "Fiddlestix." 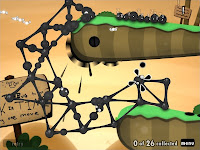 An iOS App
Mikey's second inspiration for constructing bridges comes from World of Goo.  It is an awesome iOS game. The "goo balls" act as your marshmallows would. As the player drags and drops goo balls, the "toothpicks" appear. It is a wildly entertaining game and I have to warn you that if your preschool engineer asks for help - beware. When I sit down to tackle a particularly tough one I usually get sucked in to figuring out how to build the right bridge. And right when I think I have it figured out Mikey sticks his finger on the screen to look at something and it all goes out the window. LOL.
Here's the link to the Android version: play.google.com.
Posted by Julie at 9:02 PM