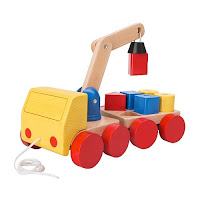 "That truck hauled toys and tools and rocks, banana peels and dirty socks..." ~ from "Where's My TRUCK?

I'm a pretty laid back Mama but even I don't want banana peels and dirty laundry all over the house because of its role as rubble. I prefer blocks, duplos, and other "clean" options. My favorite rubble is letters and Mikey and I discovered it as rubble in the most unlikely of ways. We didn't find this new fabulous rubble because we were looking for something new to do with existing toys. Instead, we were inspired by Curious George.

A Video
In "Animal Magnetism

" Curious George learns about magnets. His adventure begins at the science museum where he gets to play with all sorts of magnets and it ends at a garbage dump where he sees a crane truck with a magnet instead of a hook. Behold, a new kind of truck!

A Magnet Crane Truck Toy
Excited about a new learning experience, I dusted off the MULA Crane Truck with Blocks from Ikea, which had heretofore been ignored. Then Mikey and I went in search of things that were magnetic. Of course, I knew where to look first - on the refrigerator door.

Magnetic Rubble
As in many households, the LeapFrog letters had taken their place on the refrigerator door. I used them the most, spelling "MIKEY" or "DOG" or one of the words "Fireese" reads or spells in the YouTube video, below. (One of Mikey's favorite videos.) But now, with the magnet crane truck in hand, Mikey claimed them as his own. Here it was...the unexpected consequence of watching videos with Mikey was his new way to play with letters. Letters had become the new rubble.

I like the ones by Leapfrog because they are chunky with a great sticking factor...