The Smartest Baby on the Block, (Re)Discovering Play in Parenthood

What is a new parent to do? In the first moments of my son’s life, I remember looking at him and feeling an almost-intimidating sense of responsibility. It was suddenly of utmost importance that I do everything in my power to keep him safe, teach him, and otherwise be the best mother I could be.

I threw myself into the work. But, like many new parents, I had know idea what I was doing. I had never babysat or changed a diaper. Educated as an engineer first and an educational researcher second, I knew a lot about academic rigmarole. I knew how to design experiments (both engineering and educational) and analyze results. I knew nothing about early childhood education.

Luckily, we live in an age of information. I read everything I could find on infant sleep, parenting, feeding, developmental expectations. When I wasn’t reading internet articles or stuck with my nose in a book, I was experimenting with parenting...putting all that information to use.

Needless to say, I was fascinated by my son. I loved to give him my full attention. At home we would always be close to each other snuggling, playing, or reading. I loved taking him out on adventures to playgrounds, the library, or the children’s museum. I liked to think that his entire existence was “enriched” by me. Selfish, I know. But I loved playing and learning together. We were a dynamic duo!

Until I was pregnant.

Almost immediately after learning I was pregnant I panicked. I couldn’t imagine doing all this (over)parenting with two children. Luckily, about half way through my pregnancy, I discovered Janet Lansbury and a new perspective on parenthood and childhood.
This new perspective was a comfortable blend of new and old knowledge. It combined what I had already learned from books and through experience. It was a succinct meaningful framework I needed for guiding my work as parent.

“RIE parenting could be summed up as an awareness of our babies. We perceive and acknowledge them to be unique, separate people. We enhance our awareness by observing them — allowing them the bit of space they need to show us who they are and what they need. RIE parenting also makes us more self-aware.” - Janet Lansbury

On the bright side, I already enjoyed watching my son play. I was an expert at observing this little person and I knew that he was unique. What was new to me (embarrassingly so) was that he was separate from me. He was capable of learning and existing (to a reasonable extent) without my constant interference.

And so in the name of preparing to become a mother of two I started a new way of parenting. Slowly but surely, and with frequent protest from my son, I started to step away. I encouraged him to play alone with his toys. We negotiated how much I would do for him and with him versus how much he could try to do for himself.

Like anything worth having in life, cultivating an independent child was hard work. It was hard because it was new. I had to break my habit of being hyperactive in his life. And on the flip side of that I had to reassure him that he was safe and loved even when he felt like he was on his own. I stopped interrupting him to say “look at this!” and started waiting for him to pause and look to me to reconnect. At that point I would acknowledge his work, valuing his play, by saying “I love watching you ___.”

I still enjoyed observing him. I continued to obsess over how unique he was. And with some small changes I was able to see him step away from me toward being a more independent individual. By observing more and doing less I started to see something very valuable. I began to see just how smart a young child can be. 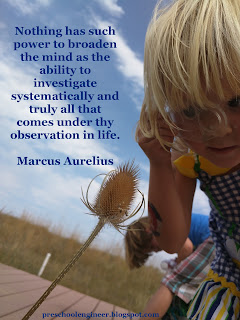 "Nothing has such power to broaden the mind as the ability to investigate systematically and truly all that comes under thy observation in life." Marcus Aurelius

Like toddlers everywhere, my son explored the world with unabashed enthusiasm. The more I watched him investigate the world, the more amazed I was by how his mind appeared to be working. It seemed as though he was a tiny scientist.

I saw him investigate physics at the playground. Before he could walk he would climb up slides and go down on his own, learning experientially about friction, gravity, and Newton’s laws of motion.

I watched him discover the power of technology when he played with his first toy car. The wheel would turn to allow the car to move forward and backward. It is something grown-ups often take for granted these days but it is often considered one of humankind’s most important life-changing inventions.

Using toys in the sandbox, I saw him change his play to investigate the sand in new ways. Watching how his process evolved to scoop, dump, build or destroy was like watching a small engineer problem solve with a new material.

And math was everywhere. He would explore volume with cups in the bathtub. He learned about quantity when he would experiment with how many things his two hands could hold.

To my delight I found a growing community of early childhood educators, associations, and businesses who advocate for learning through play. I learned that children learn more than the science, technology, engineering and math that I saw evident in my son’s play. They learn social skills; they learn confidence; they learn literacy and art. Through play children learn important fundamental skills for growing up human and humane.


So I have become an advocate for play. I have learned how to play and learn alongside my children without encroaching upon them. And I have seen how smart a young child can be if only we take the time to see the value of their play. Now I am writing to invite you to the world of early childhood play!