We were making castle cupcakes for the Princess Party. Anna was eager to help and I was ready to include her in the process. To start her off, I asked her to put the paper cupcake liners into the cupcake pan. What happened next amazed me and made me wonder more about well-chosen and well-designed "toys."

The cupcake pans were standard 12-cake pans. The paper liners came in three designs: striped, teal blue, and gold. And we were getting ready to celebrate the end of Anna's fourth trip around the sun.

I listened and looked. When she had started, she worked across the short rows of the pan. Counting four cupcake liners she filled the row of three and then worked up to place the fourth one in the next row. With the next type of liner she continued on the second row, filling two more before placing numbers three and four in the third row. Finally, with the last color, she counted "1, 2, 3, 4," and filled in the rest of the cupcake pan. 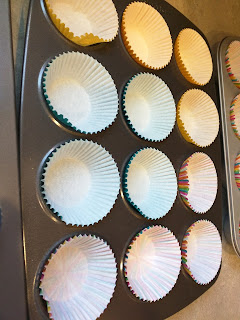 In the third pan her pattern changed. Instead of snaking back and forth across the rows, she worked with columns. "1, 2, 3, 4," fill each column with a different-patterned cupcake liner. 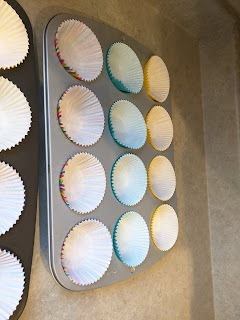 Now, I'm a firm believer that play is enough. But I also believe that having an open and authentic dialog about what your young child does can provide some awesome learning opportunities. So I hope it is obvious that I didn't expect much more than what she offered...but I do believe that her work represented notable pre-math skills.

To me her patterns represent preschool multiplication, which is something she's been working on as of late. I believe that what she said and what she did is evidence of pre-math learning. What really piques my interest is the timing and nature of the learning materials:

- The cupcake pans were standard 12-cake pans.
- The paper liners came in 3 designs: striped, teal blue, and gold.
- And we were getting ready to celebrate the end of Anna's 4th trip around the sun.

I will go back to "play is enough." I will consider it sufficient that I said (in all honesty), "I like the patterns you chose. Tell me how you did it!" and "Look at the math learning!" And I will enjoy her learning in all its glory.