It was part of our Christmas celebration. We had traveled form Colorado to Michigan to spend a mere nine days to with my husband's family and my family. Our plan was to stay with my mother-in-law and visit my family a couple days and have my family visit her house a couple times. That way my mother-in-law could soak up all the time she could in those special moments you only get when sharing a space with another family. (For better or worse. :) ) But we would also get to see my parents, my sister and her husband, and my brother and his son.

We had left my mother-in-law to catch her breath for the first time since our arrival. We arrived at my sister's house where dozens of gifts under the tree. It was our first gathering and we were all excited to see our loved ones. Soak up hugs and kisses, smiles and tickles. The six hours together would pass in a flash and the kids were excited to open presents. Almost immediately, we sat down to begin tearing into our surprises.

My daughter, almost four years old, carefully opened her first package. Her reaction was exactly what you hope for - she started hopping up and down exclaiming her excitement for the Paw Patrol dolls in the box. She sat down and asked to play. She wanted someone to join her to make them talk, go on rescue missions, and generally adventure around. It would have been enough.

But there was a mountain of gifts still waiting to be unwrapped. My family had succumbed to the appeal of the generosity of the season. (I learned later that between my mom and my sister they had bought EVERY SINGLE THING on each child's list of ideas, which I had created with them over the course of the year. The lists were NOT meant as a shopping list.) So I heard, "No, Anna. You have too many other things to unwrap. You can't play."

We didn't see her excitement again. She stopped looking at the toys and books that were beneath the wrapping paper. Her job was to rip open the paper, toss the paper and the new acquisition aside, and open the next one. My daughter became an opening machine. With her new role, her gratitude seemed to go out the window.

This new "Opening Machine" mode became her way of accepting gifts. It persisted. She approached her birthday gifts the same way. I was horrified, my heart broken. I wanted to see her take her time, show her gratitude for her new toy or book to be treasured. I wanted to see her excited again.

There are a lot of lists and articles out there about becoming minimalist, about teaching your children to be grateful, about how gifts of experience are the most treasured ones. To be sure, we received those gifts, too - a membership to the zoo, ballet lessons, a family pass to the children's museum. And when we do those things I say, "I'm so grateful to [Nana or Grammy] for this gift." But the most amazing example of a true gift is one where the child offers, "I'm so grateful for ____."

It was a mere eight weeks since the Opening Machine monster had been born. I had used my daughter's fourth birthday as a time and space to pull her back to a slow life of gratitude. But something else happened in that  time that made me realize what a true gift looks like and how it is received.

In that eight week's time, we had also had our annual ski trip in the mountains. Friends gathered from across the country to ski, snowshoe and socialize. During that trip, one of our oldest and dearest friends, someone we encourage our kids to call "Uncle," joined us and spent a considerable amount of time on the bunny slope with us. He rode the lift with Mikey, teaching him to pass the time by making shapes with his skis. He carried Anna between his legs, going "lightning" speed and enjoying her giggles. It was a pleasure to watch them come together in the sun-drenched snow, like we do every year.

Upon our return from the mountains, we embarked on writing thank you notes for Anna's birthday gifts. We sat together at the table. Anna signed her name to each card and then drew a picture. A small pile began to form and I asked her, "Which one is for Sarah?" Which one is for Audrey?" We stuffed each card into an envelope, I wrote the name of her friend on the outside, and we set them aside to deliver the next school day or play date.

Then my daughter surprised me. She said, "I want to write a one for Uncle Noodle." He had not given her a toy or book and so I asked her what she wanted to thank him for. "For taking me skiing." was her reply.

My heart melt. Her attitude of gratitude was re-emerging. She spontaneously remembered something for which she was thankful. Then she knew the importance of expressing that feeling. Of course, I handed her a card, she "wrote" her message to Uncle Noodle, and I sent it in the mail to him.

As I reflect on the experience of parenting during this last holiday season, I realize with new clarity what an "experience" gift is. More than memberships or national parks passes or ballet lessons, all of which I really love to receive, the most potent gift of experience is doing something with a child. It doesn't need to be as extravagant as skiing. It could be as simple as offering a new doll and saying, "let's play with this together!" or giving a book and saying, "I can't wait to read it with you." That is what they really want...you. And what a simple thing to give. 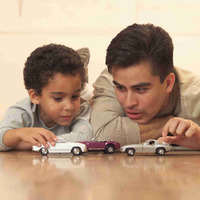