The kids are on the move. Now that they are more confident on their bicycles they want to ride them everywhere. We ride trails nearby. We ride the crowded sidewalks to school. We ride rambling around the neighborhood on the weekends. In all that time on the bikes, my children are learning rules of the road, including how to share the road.

We talk about yielding to pedestrians and animals (and why). We talk about riding on the proper side of the street (and why). In all those conversations, most of what we talk about is being aware of one's body and knowing how to be safe in and around other people.

One way to be safe on the bike is being observable. We have reflective vests for when we ride at dawn or at dusk. That way it is easier to be seen. We also have newly-acquired bike bells so that we can be heard. And it is no surprise the criteria used when each of my children chose their bell.

Anna chose hers based on the quality of the sound. She chose the Mirrycle Omnibell and she was right. The ring is a beautiful musical sound, easy to create with a flick of the button, and loud enough to be heard. (So loud and long, in fact, that it drives my autistic son crazy because he is highly sensitive to sound.) 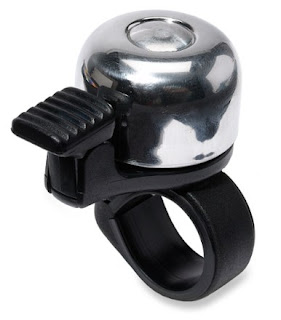 Mikey chose his based on cool factor. He wanted to Mirrycle Jellibell. The sound is fine and doesn't persist the way the Omnibell's sound does. But the way it works is too cool for school. As you can see in the picture, it has gears! Mikey's heart must have skipped a beat when he saw it. I imagine he felt so satisfied when he reached out and grabbed the blue outer ring and turned it. Turning it made the gears move and rotate the bearings that made the bell sound. And, of course, any time we get to watch gears work is a big BIG draw. 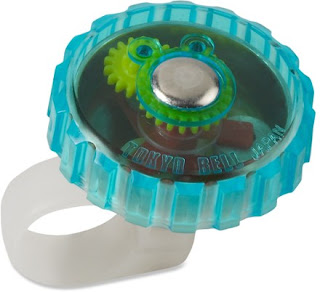 Between my two kids I am learning so many ways to be in the world. That doesn't end at music and sound. Where one child is interested in creating music and the aesthetic of it, the other is interested in the technology of sound. Again, I see the world in new ways.