Giftedness comes with intensities, high needs, and special needs. Activities and moments other families take for granted can become a planning nightmare when a gifted child, or two, is involved. Conflicting needs can lead to strained relationships between siblings and parents. How can families manage the various needs giftedness brings to the table, while creating a closer family, and maybe even while having fun? Learn from the GHF Bloggers who have managed to walk this path and come out stronger and happier. This is my take on the matter...

From the Same Soil
One autumn day my family drove the winding canyon road into the mountains to find a campsite. I marveled at a fire-red splash of color hugging the trunk of an evergreen tree. Virginia creepers climbed the entire height of the old tree but didn’t strangle it. I was amazing at how indifferent the tall tree was to the colorful vines and yet the creepers needed the tree. From the same soil these two plants grew, much the same way my children grow in our family, I thought. My son often seems indifferent to my daughter, who dances and twirls around him.

However, it is not that he is indifferent to her. It is that he has a different “love language” than she does. What matters to her doesn’t matter as much to him. And the way those differences manifest in our lives deserves a little attention, if only because if I understand the differences then I can be a better parent and, together, we will learn all the ways to express and receive love. 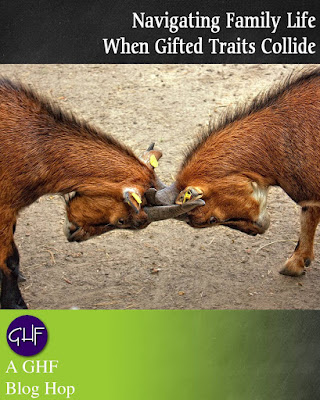 What Matters to Him and What Matters to Her
One of the most succinct summaries I have seen that sheds light on “what matters” to my children comes from the Research-Based Behaviors of Five Major Domain Profiles by Karen Rogers. In this framework, my son is both “The Brain” and “The Creative Thinker” whereas my daughter is “The Social Leader.” What matters to him? Heady, intellectual, creative, individual pursuits. To her? Attending to, navigating, and responding sensibly to social life. He looks at his work, and so does she.

He Has Our Attention
It has been that way since she was born. He was 27 months old and still required a lot of attention. As it happened, in the time it took me to change her diaper, he circumvented the child lock on one door, unlocked a padlock on the door to the garage, got a stool to reach the garage door opener, opened the garage, and ran across the street to our neighbor’s house. So the better part of her first year we attended more to his needs and his interests than to hers. If we didn’t, we risked him doing it anyways on his own.

Traipsing Together
In fact, at her six-month well-child check-up I had more questions about him than about her. That is when the pediatrician directed me to her behavioral specialist, who then showed me the trailhead for the path I have taken to learn about Sensory Processing Disorder, Autism, and Giftedness.

Shortly after meeting the behavioral specialist, he began speech therapy. And by “he” I mean “we.” The therapist welcomed all three of us - my son, my daughter, and me - into her office. I was there to ease his separation anxiety, my daughter was there because she had nowhere else to be. He would only barely engage with the work of speech therapy, keeping his eyes on the mechanically interesting toys the therapist offered him. My daughter on the other hand, soaked it all in. She watched her brother and the therapist and followed her instructions right alongside her brother.

He did, she did, and I did.
Over the course of the next year, occupational therapy was added to speech therapy as was therapeutic gymnastics. A full developmental assessment revealed that he is twice exceptional: his social skills and restrictive repetitive behavior place him in the bottom 2% of children his age, which is labeled “Autism”; his IQ places him in the top 2%, which is labeled “Gifted.”

Through all of it - the therapy, the homework from therapy, the parenting guidance offered by his doctors - we all attended to the work. He did, she did, and I did.

He Is
Fast forward four years. He is still that same rambunctious and charismatic child who is different from his peers. He draws attention from his sister and others. He is a Gifted Visual-Spatial Learner and recognized by people who see his strengths in art and science. And when it comes to social endeavors he is able to analyze the situation but he cannot intuit within it (flow naturally in playground play). He is as unwavering as an evergreen tree, imitating nothing and caring most for his inner life.

She Is
She imitates him. She imitates his intellectual pursuits - learning to read, write, build, and create things right alongside him. She imitates his restrictive repetitive behavior - flapping her arms and shaking her head in play. She gives him space when he needs it (usually), wraps him in blankets when he is cold, and reminds him to eat his lunch when we drop him off at school. She cares for him in a way that everyone recognizes as caring.

Books at the Playground
These ways they are different are rarely more apparent than when we are at the playground.

One weekend in autumn, our family went to the local library and had discovered a new book called “Electronics for Kids.” My husband and son had dived full-bore into it, creating circuits together and reading the physics related to each lesson. My son was delighted and soaring with inspiration and satisfaction. He wouldn’t leave home without it...not even to go to the playground.

So with his 328-page book and box of electronic components in hand, we walked with his sister to the neighbor playground. Upon arrival, he saw a friend from a school - a little girl plus her older sister. He was bursting with excitement. He invited them to see his book and his box of components. They came over with mild curiosity.

He asked, “Does your big sister know how to read?”
“Yes.”

“Great! She can read this for us.” The girls took one look at what he was offering, looked at each other, and told him they would rather ride their bikes.

They even asked him to join them. But he just could NOT understand how they could dismiss his interests, his offering, his intellect, HIM, so easily. As they rode their bikes in circles, he chased them reciting passages from the book, explaining that he was going to build a robot, and declaring that they must be excited that he would be their friend who could build electronics and teach them all about it.

Meanwhile, my daughter found her place under the jungle gym and opened an imaginary ice cream parlor. The girls rode their bikes to the storefront, ordered an ice cream, paid for it, took a couple licks before riding in another circle. Then they would repeat the play.

As the girls played, my son chased them, climbed around where they were, and regaled them with physics lessons. The girls were not mean; they just weren’t interested. What mattered to him didn’t matter to them.

Walking home he could not make sense of it. He told me he felt stupid, disconnected, unlovable. (In so many words.) He wanted to know why they played with his sister instead of him.

They played with her because her gift serves her well on the playground. She is a four year old who can design and direct a game that a seven year old and a nine year old will play as her peer. She appealed to their interests, connected with them, and was satisfied with her success.

When they reject his ideas they unknowingly break his heart.
The discrepancy between his feelings of disconnectedness and her feelings of connection are under the microscope at home. Together we look for an answer to his question: “why?”

The thing that sustains him, excites him, and feeds his soul does not serve him well on the playground. It is not the place for thinking, reading, learning...at least not to most seven year olds. But he opens his heart when he shares ideas. If the person with whom he shares does not hold ideas, learning, reading (at the playground) in the same esteem, then when they reject his ideas they unknowingly break his heart.

His four year old sister might be the only child who sees his heartbreak. She offers him gifts to cheer him up - small drawings she’s made, a cookie, a hug. When he rejects her gifts he unknowingly breaks her heart.

What matters to him is what he needs. As a “Brain” and “Creative Thinker” his unmet needs often land solidly in the “Autonomy” and “Growth” categories of the List of Needs from Happily Family/Nonviolent Communication.

What matters to her is what she needs. As a “Social Leader” her unmet needs often land in the “Acknowledgement,” “Attention” and “Connection” categories.

He needs ideas. He needs to learn and to teach. He needs to build and to dissect. And to feel loved, he needs to do those things with other people.

To Love and Be Loved
So here I have two children with two different sets of needs, a tree and a vine. I love them for who they are, but when it comes to parenting them I aim to give him what he needs, to give her what she needs, even if their needs are different...because fair isn't everyone getting the same but everyone getting what they need.

To this end, I make time and space for him to learn with and to teach his sister. I make time for her to direct things. I hear her say, “That’s so interesting!” to her brother and know his heart swells with pride. Her heart finds peace when I teach her brother how to acknowledge her efforts by saying “thank you.” In these ways my family learns how to love and be loved.

Read more about how gifted traits collide at the GHF Blog Hop... 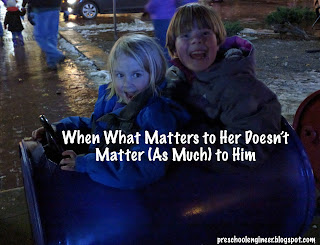