Autism & Sound Sensitivity: Hindsight is 20:20
We had been parenting our son for four years when we got the diagnoses: autism, phonological disorder. In the days that followed, my husband and I started to understand things in a new light. Autism explained so many of the otherwise inexplicable behaviors we had struggled to parent. Our hindsight was 20:20.

It has been more than three years since the diagnosis and sensitivity to sound remains one of the most impactful symptoms. The cacophony of daily life doesn't appear to be painful, per se, but my son's incredible sense of hearing and his inability to process the sounds set him on edge.

This is what sound sensitivity means to our family...

Audiophiles Go Silent
My husband and I are audiophiles, lovers of music. We have invested in a high-end stereo and countless CDs. When he was very small, I loved to listen to music with our son in my lap, singing along, dancing. I even liked to have music playing in the background while i did housework.

The problem was that if the music was on in the background, my son was frantic. He toddled around without direction, seeming to be scared, on edge, and crazy. He would find the quietest place to retreat to. It was a simple solution to turn off the music.

And so that is how two audiophiles went silent. To ease our son's obvious anxiety, we turned off the music.

Outdoors Works Too
A quiet indoor space was a wonderful place for my son but so was the outdoors. He was always such a delightful person to be around when we were outdoors. So I spent as much time as I could taking him to playgrounds, parks, and hiking trails.

We Can't Always Be Quiet
The problem is that we can't always be quiet. Sometimes life gets a little noisy. The house, grocery stores, restaurants, gymnastics, and places like them often have a level of background noise above my son's threshold.

So we avoid noisy places if we can. If we can't, we try to be prepared to tolerate his my son’s first-best self-regulating technique: stimming. Jumping, punching himself in the head, flapping his arms, spinning in circles, shaking his head vigorously left-right-left-right, and rolling on the floor are his go-to behaviors. If stimming got out of control or disruptive, which it often did, we would leave.

At home, we do our best to keep the space comfortable for him. It is, after all, a small thing we can do to love him and make him feel safe.

Echo and Din (Two Christmas Stories)
It is January 2017 and my son has been attending public school for three years - preschool, kindergarten, and now first grade. It does not seem that exposure to indoor noise has helped him tolerate it. These are a couple short stories about sound sensitivity that happened a week ago.

The Echo of Conversation
It was Christmas. We had spent the better part of the day in a comfortably finished basement. It was a quiet space. The walls surrounded by the earth, the false ceiling insulating noise from upstairs, carpet under foot. Even the lights did not seem to buzz. The only sounds were those from my children while they played with new toys and reading new books. It was a quiet space.

In the early afternoon two guests arrived, a beloved pair, aunt and uncle. Our numbers had grown from five (me, my husband, my son, my daughter, and my mother-in-law) to seven. Not a big increase by any means. And yet the noise increased. Uncle had laid down to play with my daughter on the floor. Pregnant Auntie was talking with Nana about the baby she was expecting soon. My son began to vibrate with anxiety.

He said to me, "It is too noisy. I want to show them my new electronics and robot. But I need it to be quieter." While he was expressing his needs, he was moving all his things to a far corner of the basement, as far away from the collection of people as he could.

It seemed like he just couldn't tune out the noise of the conversation. The sounds bounced off the walls of the basement and vibrated him to his core.

I gently took him to the group and said, "Mikey would like to show you something."

The conversation stopped and he was able to share what he needed to share. After that initial connection, the adults were able to go back to a table and talk. My son stayed in his quiet(er) place and worked on building things.

All the while, I marveled at how hard it must be for him to just be but also at how effectively he coped with noise by immersing himself in building something.

The Din of Background Music
Two days later we went to visit my parents. We were welcomed into their space, which was heated by a wood-burning stove and made festive by background Christmas music.

We were expected to stay there, all crowded together and enjoying each other's company but, as you may guess, my son was not going to do that. Instead, he found his way to the large unfinished basement where he discovered a ping pong table standing on the chilly cement floor. It was cold down there but at least it was quiet.

He spent almost the entire four hours in the basement, playing ping pong with his father.


An All-New Unthinkable & Superhero
It was the end of the first day back at school. My son pulled out his work from the day and exclaimed, excitedly, "I made a new Unthinkable!" These Unthinkables have been a huge success this year, invaluable tools for him to understand when he is having a hard time of things. Designed by the team at SocialThinking.com, the Unthinkables are creatures like "Glassman" who overreacts to the smallest things and "Topic Twistermister" who talks on and on spinning stories that are seemingly unrelated. 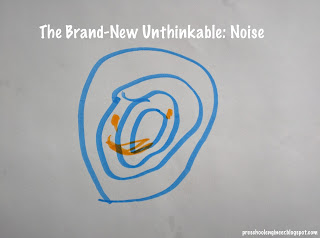 And the Brand-New Superhero he designed to combat Noise? A Super-builder named Bolts. 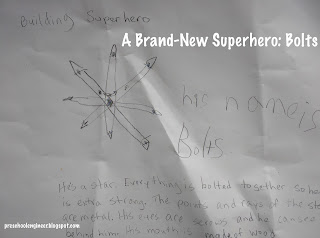 "How poignant," I thought. He is very well aware of the way noise effects him AND he knows that he copes by building.

A Case Study of One
So here we are still trying to figure out how background noise plays a role in our lives. I have gone digging to learn more about it. I've found a handful of articles:

None of them seem to quite fit the bill. And so I'm writing this blog. This is what I know about my child:


Moving forward I do not expect him to "get used to it" through exposure. I will just continue to kluge together best practices that work for him and for our family including:

It is my job to help him find his way in the world. This is how I can do it.