Revisiting 2e Issues: The Danger of Ignorance is Broken Children

My 2e Autistic child has suffered injury because of the unique way he moves through the world. Most importantly, the way his giftedness (verbally precocious) fools his caregivers into having unreasonable expectations has resulted in a broken arm and a broken heart (dangerously close to depression). The following stories are my plead to therapists, teachers, and other caregivers to take a step back and consider “bad” behavior by 2e kids as a desperate call for help. Each story is also a cautionary tale to parents. 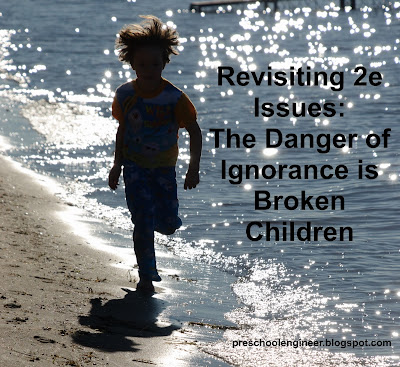 I cried over the pages of The Out-of-Sync Child. Finally I understood how and why my almost-three year old son was out of sync. He is undersensitive. Signals between his mouth and brain were muted, which explained his affinity for food with textures that were not too hard, nor too soft, but just right. It explained why he was so anxious in noisy places - the sound never got processed correctly. It explained the constant repetitive motion - jumping, spinning, arm flapping - and the ways he earned adrenaline junkie status at age two. It explained why when he fell on concrete and came up bloody he never once shed a tear or sought comfort, instead continuing right on what he had been doing before his faceplant.

Reading that book was the first research in my journey to understanding twice exceptionality. My son’s subsequent diagnoses (Autism, Phonological Disorder) and cognitive assessment (Highly Gifted) pointed us toward occupational therapy and speech therapy. So that is how I took my four year old to Pillar.

We had been going twice a week to Pillar for a year when it happened. Normally my two year old and I would wait in the waiting room while Tigger would do his work. Some people would drop their children off and go run errands but I usually just sat and read books and played finger games with Twinkle. Until the day I didn’t. Twinkle and I ran to the grocery store.

When we got back to the office there were no signs that anything had happened. At the end of the session the therapist walked Tigger out and said, “Tigger fell off the swing today. He wasn’t listening. When he landed he cried and cried and cried but he’s fine.”

But then I figured that if I had something to worry about that she would have told me. I assumed someone would have told me something. But they didn’t. So I took Tigger and Twinkle home.
Over the course of the day I noticed that Tigger wasn’t using one of his arms. So I asked him to lift a fork for me with that arm and he couldn’t without wincing.

A trip to his doctor revealed a broken arm.

I was livid. I was angry that he had broken his arm in their care. I was disappointed in myself that I hadn’t trusted my gut - that nagging feeling that something wasn’t right when they told me he had cried and cried and cried. Regardless of how I was feeling, I had to spend the rest of the day carting him between doctor offices to get the break diagnosed and treated.

The next day I asked to talk with the owner and the therapists. This is what I was told:

Let’s put aside the fact that they were protected legally because they were “following protocol” by putting pads under the swing. That is a conversation for a whole other topic. Let’s just focus on the part: “He wasn’t listening.”

He was four years old.

But twice exceptional autistic four year olds? If they are laughing and “not listening” then they probably aren’t even on this planet. They are higher than high with happiness. If other 2e four year olds are like my son, then you need to stop the ride, get eye-to-eye, and reconnect with them to bring them down from the clouds of glee.

So tell me. If a four year old did not appear to be listening to you, would you allow him or her to swing? Would you assume he was being defiant? Or would you pause and try to connect with that child and make a safer choice?

Now when I leave my son in the care of a ski instructor, karate coach, or anyone, I tell them: “If he doesn’t seem to be listening, then do not assume he is being defiant. Assume he does not hear you. You will have to get eye-to-eye with him to bring his attention back to you and your request.”

No matter if it is someone who has had training with 2e kids, autistic kids, or gifted kids, I still tell them. Because if they just “follow protocol” instead of following my child, then he is likely to be injured again. And I will not give anyone the excuse of not recognizing his “bad” behavior for what it is, nor the out of not knowing what to do.

We disenrolled Tigger because his health and safety needs were not being met and we were not willing to put them further at risk while we waited even longer for the school to put a plan in place. I am writing now to bring the most salient concerns to your attention without the filter of the IEP team and to ask one question.

The problem easiest to discern is Tigger’s increased eloping. His classroom teacher reported that he was showing up unexpectedly at the SpEd room, at the counselor’s office, and at other teachers’ classrooms. The study written in Pediatrics shows that wandering is a serious issue but an important one for families and schools to attend to. His classroom teacher said that she wrote a Safety Plan but that it wasn’t working. He was still eloping during the school day and leaving the school before dismissal without her permission. You can imagine our concern when we learned this information, especially when we considered how he has been telling us that he “doesn’t deserve to be alive” and that he was going to “walk into traffic.”

His decline in mental health is only slightly harder to coincide with his school attendance. At the start of the year he was known as an energetic, charismatic, and creative young boy. He was intellectually insatiable with a special craving for novel and complex systems (scientific and social). By January he had stopped showing interest in learning, working creatively, or doing karate, and it was noticed by the providers and people who have known him intimately for years.

After the community-building part of the year (the first three weeks), he started begging to stay home from school. Hour-long meltdowns seven days a week lessened to five days a week, then to five minutes per day, but they never stopped. Angry or sad, he requested daily to stay home from school. He started sobbing during our evening prayer claiming “I don’t deserve love.” That was when things first started to unravel at school...the music teacher called very concerned about the holiday performance. Next he confessed to his therapist/yoga instructor “I don’t deserve to be alive.”

The recommendation from the counselor’s Suicide Risk Assessment was to “give him different language” to express himself. She was wrong to assume that Tigger’s vocabulary is insufficient given that he has demonstrated above-average verbal comprehension on the Verbal Comprehension Index and we have been actively and intentionally teaching him skills to identify and name his emotions since he was born. Her response suggested that she could not (or would not) offer me viable or valuable solutions to meet my son’s needs. That evening he threatened to walk into traffic but it had been the last day of fall semester.

Winter break was not without intensities, but in those weeks he never uttered a statement of self-loathing. Two days after attending school in January he stormed toward the exit of our house to walk into traffic again.

His emotional outbursts were not happening just at home any more. I started getting calls, emails, or pick-up assertions that he had had a “bad” day - crying unexpectedly requiring intervention, angry outbursts, increased eloping, required interventions from whomever was available (sometimes the speech therapist, sometimes the counselor, sometimes the classroom teacher). The classroom teacher and others were asking me my advice but not able to implement what works at home for lack of resources. For example, the classroom teacher told me that she tried to give him the sensory breaks he needs but that she cannot because she has an entire class full of children for whom she is responsible. She also said that he performs beautifully academically when he has one-on-one support but that she could not give him one-on-one support he needs, again because of her responsibilities as classroom teacher.

So I requested increased one-on-one support either in the form of pullout or classroom aide. I even reiterated my proposal for a new program that I volunteered to build that would serve more than just Tigger.

At parent-teacher conferences last week everyone asked me what had happened at home that might have caused Tigger’s decline. Believe me, if there was something we would have taken care of it. We have had the same daily and weekly routines for two years. My husband has had the same consistent and fulfilling job. We are screen-free, food-dye-free, and eat good food made from scratch. (Gluten-elimination and casein-elimination yielded no changes.)  No one has come or gone from our lives unexpectedly. His therapists concur with us that his life at school is the source of his anxiety, imminent depression, and suicidal ideations.

Why was my request for the School to meet my son’s needs for more one-on-one support denied?

I have not received an answer that demonstrates ownership of any misunderstanding or wrong-doing. (Duh.) And so I am left to draw conclusions based on piecing together the responses I got over the course of the year and the way I was treated during those answers...as an overbearing hysterical looney of a mother.

The single most telling “data” I have is what the school counselor told my son’s advocate. I had given permission for them to connect to, hopefully, partner to find a solution to his behavior which was becoming increasingly problematic at school and worrisome at home:

“Plenty of kids have it worse than Tigger.”

He was not fine. And when I observed a school-wide 500-person assembly, he was the only child I saw stimming in an attempt to self-regulate. He was also the only award-winner who was taking advantage of physical space of a the stage (half of it!) to move his body - bouncing, spinning, flapping his arms, and shaking his head. He had won a reading award but his body was brimming with physical energy and anxiety.

That’s not what they saw. My gut told me:

They all heaved a big sigh of relief when I disenrolled my son. He was too much, and so was I. 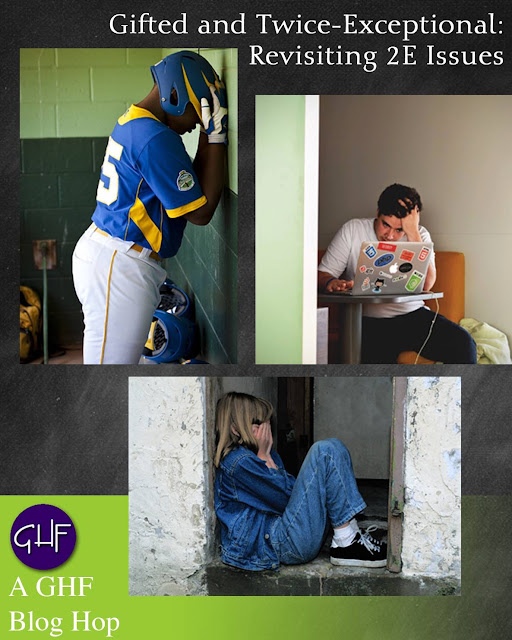 This was written as part of the GHF Bloghop. Cruise over to their site for more blogs about Issues of Twice Exceptionality.