The Consequences of Breaking the Rules

My whole life I have been a rule-follower, someone who works dutifully through checklists, and I ALWAYS work before I play. In parenthood, that all went out the door.

There are very few "rules" for parenthood...no guidebook, no if-then certainties. Checklists are not something I do, replaced by milestones for children to take care of and, even then, they meet their milestones at their own pace and in their own order. Play is work.

With that in mind, PLAY IS WORK, I'd like to turn your attention to what happened when we broke the rules to play a game together. It turns out that the consequences of breaking the rules might not be what you'd expect... 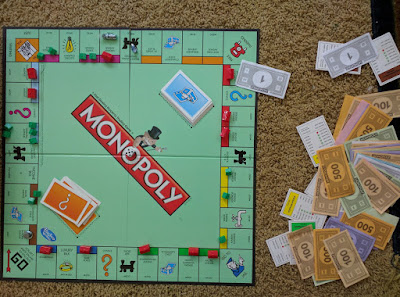 Monopoly is not recommended for young children. It is a complex game, there are small pieces, and it takes forever to play. But here's the first rule my family broke: we bought it to play with our children, ages 6 and 4.

They love the tiny houses and hotels, the play money, and the tiny game pieces. They love that we sit together and play, giving and receiving each other's full attention.

I have learned that gaming is another place where rules are merely suggestions, and playing really is work.

Broken Rule #2: Everyone Gets to Choose their First Property

One of Tigger's favorite things is electricity. When he found out he could own an Electric Company, his heart was set. So we made our own rule: everyone gets to pick one property before the game begins. He always picks the Electric Company; she usually opts for the Water Company (if there were a restaurant she'd probably choose that instead); and my husband and I each pick something that has a comparable purchase price to the utility companies.

I heard them whispering. I was in the kitchen and they were scheming over the Monopoly board in the next room. I couldn't make out what they were saying but I had a good guess as to what they were doing...stealing.

The two had robbed the bank and taken whatever they deemed would be "enough" money. They had divvied up the remaining properties, swapped one of mine out, and put hotels and houses up all over the board. The degree to which they paid, and paid the right amount, is left to the imagination. And they each had Get Out of Jail Free "credit" cards (they explained that they could swipe the cards five times).

The old me, the one who was the rule-follower and the checklist maker, would have scolded them for not following the rules, for pointing out that it wasn't fair, et cetera, et cetera.

Broken Rule #4: Everyone Plays, Not Everyone Pays

Between my rough start (going to jail several times) and the robbery, I was left with a paltry hand. I had less than $500 and a handful of properties. Compared to my children, who each had thousands, I knew I was in trouble.

I landed on one of Tigger's properties with a hotel and owed $900 rent. Instead of handing over all my cash and deeds and declaring, "I'm out!" I offered, "I can pay half."

He said, "Well, you can try to pay but it might not be accepted."

I offered him a stack of money. He took it, put it through an imaginary machine, and gave all the money back to me. "I would rather have you stay in the game than pay all your money to me," he offered.

"Thank you," I said. And the game continued. When he landed on one of my properties, I told him that he didn't have to pay. It was my "Thank you" for his generosity.

Then it was her turn.

She landed on one of his hotels and owed him $1000, which he insisted she pay.

"Because you can afford it," he said.

"Mama couldn't afford it but you can," he tried to explain.

"Do you think he'd make you pay if you couldn't afford it?" I asked.

"If we want to keep playing, then we help each other out," he said. Then he began rolling in the money, giggling, "Isn't it fun having all this money?!"

"Yeah!" she said, enjoying her piles of money and title deeds similarly.

Unexpected Consequences of Breaking the Rules

I had no clue that we would discuss economics, equity, generosity, and reciprocity. Those are big topics for little people. But that's exactly what we got to discuss...and we wouldn't have had that chance if we had remained conservative, following the rules, playing the game the way Hasbro intended us to.

Over the course of this journey of motherhood I have shed (a lot of) my uptight control-freak checklist mania in favor of a more flexible, more patient, more understanding way of parenting/leading/teaching and learning alongside my children. I dare say, breaking the rules works for us.

Email ThisBlogThis!Share to TwitterShare to FacebookShare to Pinterest
Labels: beyond preschool, gameschool, parenting