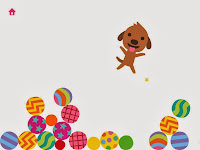 Simple things make me happy. For instance, I really like when iPhone apps reflect gravity. Holding and tilting the phone makes balls "fall" appropriately shouldn't be so delightful for me but it is. Something that I hold as a three-dimensional physical phenomenon depicted well is just neat. One of my favorite uses of gravity in an app is part of Sago Sago's "Sound Box."

Sago Mini Sound Box is a musical game, perhaps one that isn't readily apparent as a Preschool Engineering app. Two not-so-obvious aspects of the game make it STEMy, or STEAMy. First, the screen is blank but the space is broken into a piano-like keyboard. Tapping from left to right the player will hear a pattern of sound similar to playing a piano. Second, it is how gravity works in to music playing that makes it even more STEMy, or STEAMy.

This is how the app works: The player can choose one of nine instruments. Today, my 1.5 year old daughter and I chose the piano. Each time she tapped the screen a circle (ball) appeared and we heard the sound of a piano key being played. Tapping many times she acquired many balls. Tilting and turning the phone made the balls fall with gravity and when they rolled into each other the piano music collided. The tinkling sounds were lovely. Then my daughter got another delightful surprise. If she held her finger long enough the circle grew and grew until an animal "hatched." "Doggie!" she'd exclaim, or, "Birdie!"

Sometimes it is a simple but beautiful physical phenomenon that I find intriguing. If you want to see gravity used simply and with whimsy then check out Sago Sago's Sound Box here. 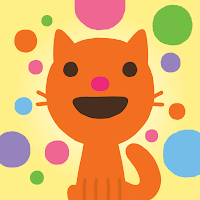