We're always on the lookout for good apps! Here is a list of our favs.

5. Amazing Alex. My husband found "Amazing Alex" when he was reading Wired. It was listed as a great app for a "future engineer." The premise is that "Alex" has to clean up his room. The reality of playing is that there are balls that drop and have to roll over stars to collect points and end up in a basket, box or other container. To play, your preschool engineer will have to drag and drop shelves to be inclined plans that support the bouncing/rolling balls. For any child who has experimented with slides, this will be easy and fun. There is a "Classroom" where he or she will learn the basic principles of how the game works (pictured on right) and the levels progress at a pace that is fast for a three year old but about right for a three year old and his mama, ahem. Read more on my "Inclined Planes" post. 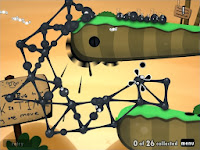 4. World of Goo.  In World of Goo the player constructs bridges using "goo balls." When the player uses a finger to drag one goo ball out of a pile of goo balls, support beams appear. It is called a "physics puzzle/construction game." It is a wildly entertaining game and I have to warn you that if your preschool engineer asks for help - beware. When I sit down to tackle a particularly tough one I usually get sucked in to figuring out how to build the right bridge. And right when I think I have it figured out Mikey sticks his finger on the screen to look at something and it all goes out the window. LOL.
Here's the link to the Android version: play.google.com. It is also available for the Wii. Read more on my "Building Bridges" post.

3. Bad Piggies. "Bad Piggies" is our current favorite preschool engineering app. Each level of the game is set in a different setting of hills, ramps, holes, and other obstacles. The player must create a vehicle that will transport a Piggie from start to finish. This game has it all. It has an easy interface for a preschooler to drag and drop to build vehicles. It has awesome features that are available and/or required for the vehicle to succesfully complete the obstacle course. Each level offers increasingly more options to propel the vehicle including motors, propellers, balloons, punching gloves, fizzy shaking soda bottles, rockets, fans, and more! Here are links to the game in the iTunes store: Bad Piggies HD - Rovio Entertainment Ltd; and Play.google.com. There are free versions and cheap versions of the game to download.
Read more here.

2. Toca Builders. Toca Boca makes a lot of awesome games. It was hard for me to choose only two for the top five app list but after reflecting on the nature of preschool engineering I decided that Toca Builders had to be on the list. It is another construction game, like Amazing Alex, World of Goo and Bad Piggies, which is appropriate for Preschool Engineering. What makes it different? It is 3D building. Each of characters has a specialty. One drops blocks behind him as he runs and if he encounters a block then he smashes it. One, poised on a ball, leaves a trail of colored ground behind him. Another shoots spit wads of paint (for lack of a better description) that splat on a target. Defying the laws of building with real blocks, one builder can suspend a block in thin air. The player can rotate the perspective to see where he or she is and what has been built. It is an incredible game for a preschool engineer and one that will grow with the child. Available on iTunes, Android, and Kindle Fire. 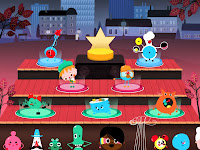 1. Toca Band. This is the best app for a preschool engineer and his or her parents. Each "instrument" is located along the bottom of the screen. The player drags and drops the instrument to a circle. If the instrument is placed on one of the circle pads on the bottom row then it will have a slow tempo. The middle row has faster tempo and the top row is the fastest tempo. So the banjo plays slowly on the bottom, faster in the middle, and fastest on the top. The yellow pad that has a star is actually a lift so your child can investigate the nuances of each instrument in turn. She can pluck the strings of the harp or make the percussionist shake, rattle, and roll. Discovering how each instrument works will intrigue a preschool engineer.

Your child can create ensemble music and it is almost fool-proof. Some ensembles sound better than others and I think that is the interesting thing for a preschool engineer. Even my 1.5 year old has success with it because she can see and hear something interesting by merely touching one of the musicians pictured at the bottom. Still learning how to touch the iPad, she even has some success dragging and dropping the musicians to a place on the band stand!